This page provides some documenation on other services used within burble.dn42 that are not directly available for public use.

Core nodes run an nginx container that acts as a reverse proxy for services hosted in tier2.

The reverse proxy is distributed to improve local response times and is anycast as rproxy.burble.dn42. Most web services provided by burble.dn42 are simply CNAMEs to the reverse proxy which then balances and forwards the request to the actual service.

As well as a reverse proxy, nginx also provides:

n8n is used to provide an automation and workflow service.

As an example, n8n is used to update dn42regsrv and [ROA tables](/services/public#ROA Tables) when the registry changes. 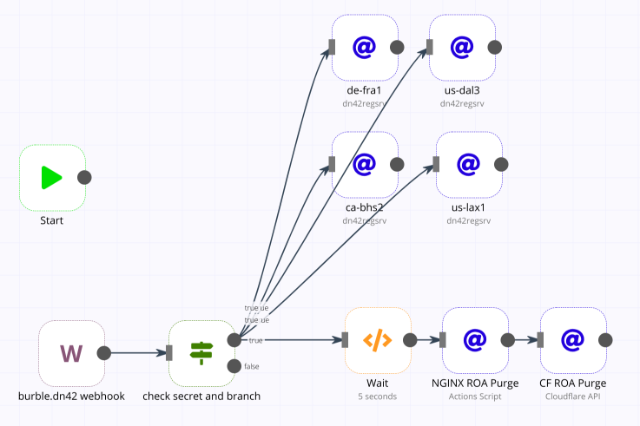 Hashicorp Vault is used to handle secrets across the burble.dn42 network.
Vault is deployed as a 3 node cluster across the Europe core nodes and uses the internal vault database as a back end.

Vault acts as the main certificate authority for burble.dn42 PKI.

Vault also acts as an SSH certificate authority, verifying both users and servers within the network.

Most burble.dn42 are built as stateless container images and secrets are pushed from vault in to the live containers at runtime. This ensures the container images do not contain secrets and that secrets can be applied per instance even when using a common image.

Vault also manages database credentials (using the mysql/mariadb integration), and these are also automatically generated and pushed in to container instances on deployment.

The burble.dn42 git has an associated CI/CD service based on drone.

The CI/CD service is used to manage DNS, build and publish applications and the burble.dn42 website.

min.io is used as an S3 compatible block storage service. For example, min.io is used for storing build artifacts from CI pipelines.

As well as a central storage server, min.io is deployed in ‘gateway’ mode to provide local, regional caches for the block storage.

For lurking on #dn42 I use thelounge, a web based IRC client.